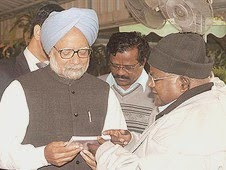 Jesuit Father A. X. J. Bosco has a major goal in life: getting justice for Christians of former low caste origin. For this cause, the short and stocky priest has spent the past seven years lobbying politicians and organizing demonstrations in New Delhi.

The 66-year-old priest has encountered many hurdles, but the worst is what he calls the apathy of Church leaders in India. Nearly 63 per cent Catholics and a “greater percentage” of Protestants in India are dalits, but “unfortunately 95 per cent of bishops, or those wielding power in the Church, are from other castes and do not care for dalit people,” he says.

Father Bosco, who heads the Jesuit-run Centre for Information, Training, Research and Action in Secunderabad, Andhra Pradesh, is also chairman of the National Council for Dalit Christians. The council recently announced it will boycott unsympathetic political parties during state assembly polls in five Indian states in April. However it seems to have no clue how to tackle the indifferent Church hierarchy.

Father Bosco, former provincial of Andhra Pradesh Jesuits, also holds something else against Church leaders. Their brainwashing of Christians to remain patient and non-reactionary has made the community passive in the eyes of the government and public, he says.

He pointed to the violent protests by Sikhs in 1955, which forced the government to grant special constitutional privileges for their dalit brethren.

If the bishops are not concerned about issues affecting the majority of their people, what is it that preoccupies them then? Minority rights according to Father Bosco.
“The Church has a lot of educational institutions and the minority rights protect them,” Father Bosco says. “The Church leadership has least concern for justice related issues,” Bosco alleges, citing the case of a bishops’ delegation that met Sonia Gandhi, chairperson of the ruling federal alliance, some years ago. “Shamefully, its first demand was concerning the Foreign Currency Regulation Act,” he said. The problems of dalit and tribal people figured much lower on its list of priorities.

Why don’t people take the dalit Christian issue seriously? Because it is not important to politicians, Father Bosco explains. “Only 2.4 per cent of the Indian population is Christian and dalit Christians make up around 1.6 per cent. It is not a big vote base for them,” he adds.

Another problem is caste prejudice among Indians. “Most people are not sympathetic to the dalit cause and that pains me,” the former Jesuit novice master said. People look at the dalit Christian issue through a caste prism.

Even the government and the judiciary do not see the contradiction in granting special privileges to Sikhs and Buddhists while denying them to Christians and Muslims. “Like Christians, the Sikhs and Buddhist are minorities, but they enjoy statutory privileges. It is dehumanizing and unjust,” he declared.

Father Bosco rejects the stand that the theology or scriptures of Christianity and Islam do not recognize the caste system.
“Indian Christians inherited the caste system from Indian culture,” he says.
Discrimination against dalit Christians has forced them to “live a double life as Hindus publicly and as Christians in private,” he alleges.

According to Father Bosco, most dalit Christians are “very poor” and need government concessions and scholarships. So some dalit people obtain certificates that depict them as Hindus.

The Jesuit priest estimates that around 5 million Christians have “reconverted” to Hinduism in the past six decades to get government concessions.
Now dalit Christians have pinned their hopes on the Supreme Court. The apex court was to hear a public interest suit at the end of February, but it was put back. The petition seeks the removal Paragraph 3 of the Constitutional Scheduled Caste Order of 1950 that restricted special privileges to Hindus, Sikhs and Buddhists. When the chief justice asked the government why that paragraph should not be removed, the government’s lawyer requested for more time to answer.
The government set up a commission to study the matter. The Justice Ranganath Misra Commission endorsed the dalit demand since it found evidence to prove that Christianity and Islam should not be associated with India’s caste system.
Separate cemeteries for dalit and upper caste Christians, different seating arrangements for dalit in churches, celebrating parish feasts at different times all indicate how deeply the caste system has etched into Indian Christians’ psyche.

In Tamil Nadu, upper caste Christians attacked dalit for defying caste taboos. A dalit youth who dug a grave to bury the body of another dalit was murdered.
“These are just two incidents that show the horror of caste discrimination among Christians, starting with bishops, priests and nuns,” Father Bosco lamented.

The Misra commission report prompted dalit groups to intensify their lobbying with political leaders. “But so far nothing has happened,” he said.
Father Bosco is certain the government would have yielded to dalit Christian demands if the entire Church had worked wholeheartedly and as one.
Until that happens, his mission remains incomplete.
===============================================
Posted by BOSCO at 06:05 No comments: